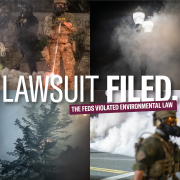 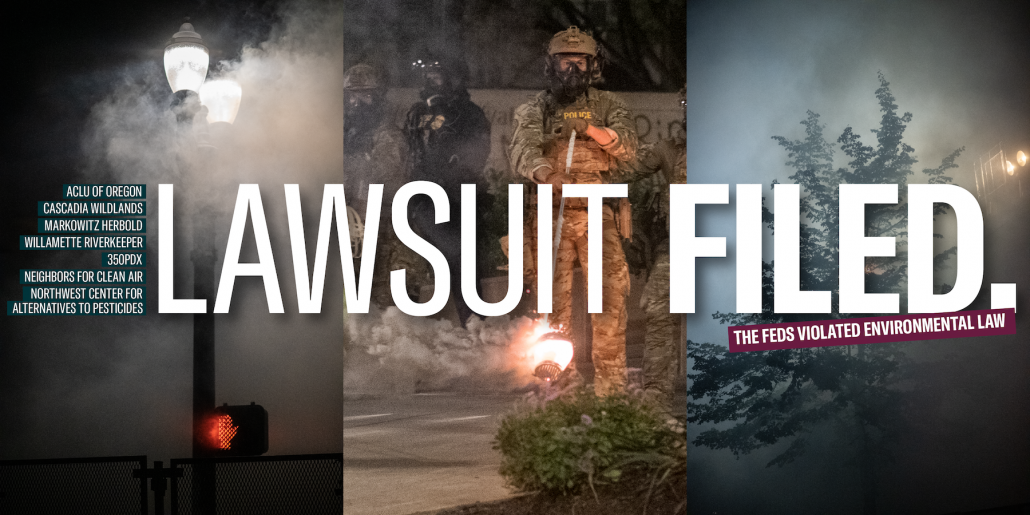 For 125 days anti-racist Black Lives Matter protests have been taking to the streets here in Portland demanding racial justice. These protests have been met with some of the most repressive measures by local police and federal agents in recent history.

Protesters have regularly been subject to massive, indiscriminate deployments of teargas, pepper spray, and other chemical munitions including toxic smoke grenades linked to cancer and kidney and liver damage. With no regard for health or safety, the federal government blatantly violated federal environmental law when it flooded Portland and the surrounding communities with an unprecedented amount of dangerous chemical weapons.

A broad coalition of environmental justice and civil rights advocates, including 350PDX, have filed a legal challenge against the Department of Homeland Security (DHS) today. The lawsuit cites the federal agency’s failure to analyze the potentially severe human health and environmental impacts before deploying chemical munitions against anti-racist protesters in Portland as required by the National Environmental Policy Act (NEPA). We seek a court order forcing the DHS to halt their use of chemical munitions, including tear gas, until the DHS performs a thorough analysis of the health and environmental impacts of these chemicals, and makes this information available to the public. Read more here.

350PDX has decided to get involved in this lawsuit for several reasons.

– We can’t have climate justice without racial justice. We will use every tool we have available to protect those fighting for Black lives and liberation.

– Protecting the right to protest. We believe in people power, and street protest is one of our best tools to bring about transformative change. In the coming months and years we will need protest more than ever, and we need to take a stand now to affirm that protesting is not terrorism, but is a right that needs protecting.

– Everyone has a right to know what the feds have been doing to protesters and to public and environmental health. The media backlash against the protests has relentlessly mischaracterized the protests as violent riots. The public deserves to know that the vast majority of the violence and escalation has come from law enforcement, including DHS’s chemical warfare. The public has a right to know the risks DHS has been taking with our health and environment in order to put down the protests for Black lives.

“I’ve been on the ground facing tear gas and police brutality for months because racial justice and climate justice are faces of the same struggle for a just and livable future, one that as a young person of color I expect to be in all my life. The price of justice shouldn’t be further harm to public health and to the Black, Indigenous, and other people of color who are already out here fighting for their lives. Everyone has a right to know the impacts of the toxic chemicals we’re being subjected to by our government.”

Do you think we do good work? Consider helping us through this tumultuous year by becoming a sustaining donor! Monthly donations help us remain stable so we can focus more on fighting for our campaigns, and also allow us to act quickly when new needs arise, like the pandemic, the wildfires, and the Black Lives Matter uprising.

Our election plan
Scroll to top