As a community organizer, I played a founding role in a historic coalition effort that united communities of color with mainstream environmental organizations to establish the Portland Clean Energy Fund (PCEF). After being excluded from environmental funding for decades, communities of color and our allies came together to prioritize solutions that would be led by and benefit those most impacted by climate change.

Our fossil fuel-based economy creates many inequities, including high energy costs, lack of good-paying jobs, and greenhouse gas emissions — which impact low-income communities and communities of color the most. The Portland Clean Energy Fund requires that programs take a holistic approach in addressing these inequities, and grantees are meeting the high standards of the program with innovative solutions. Now, communities of color are updating low-income people’s homes with ductless heat pumps at Verde Builds, creating job opportunities for formerly incarcerated people at Constructing Hope, and doing deep energy retrofits for low-income homes through the Community Energy Project. 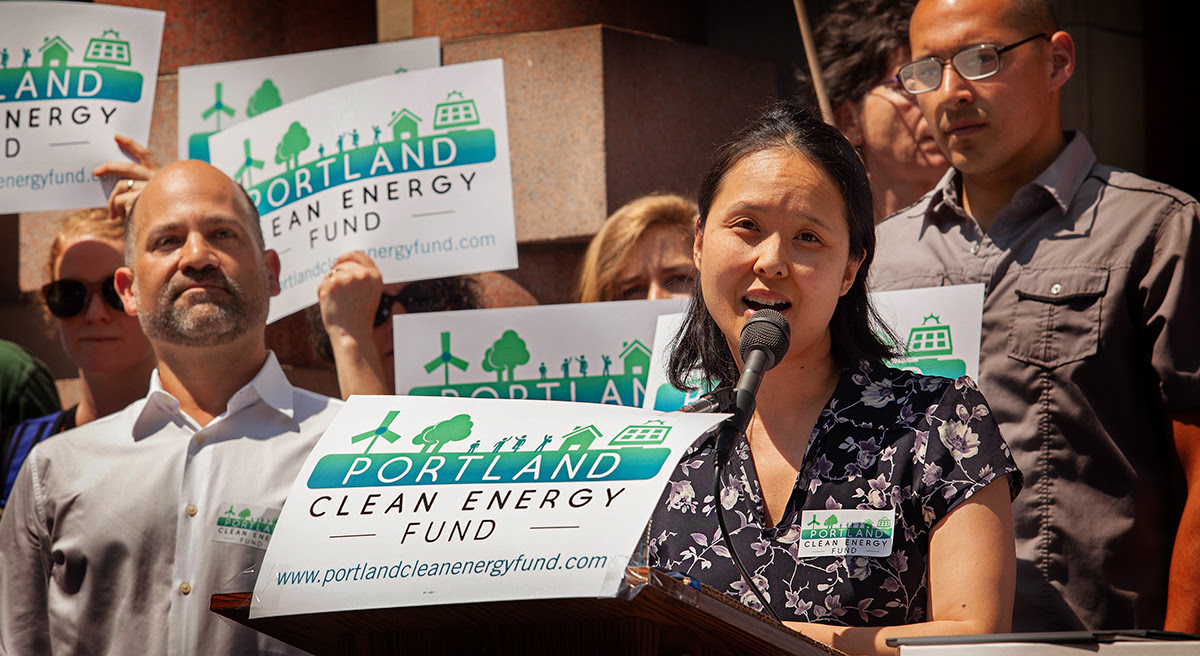 Rep. Khanh Pham speaks at a campaign event for the Portland Clean Energy Fund in 2018.

Simultaneously, the climate crisis is hitting our most vulnerable now. As the Intergovernmental Panel on Climate Change report released last month made clear, we are locked into 1.5 degrees of warming and well on our way to 2 degrees. In the last year, our most vulnerable communities have suffered extreme wildfires, multiple deadly heat waves and equally deadly ice storms. Climate disaster is here, lives are being lost and our communities are vulnerable now.

The lack of bold climate action by government agencies and leaders is why Portland voters decided to meet the challenge of climate action by passing a ballot measure that provides funding for our most impacted neighbors to reduce their greenhouse emissions while also building resilience to the deadly heat waves, ice storms and smoke events that have already arrived in our city.

Unfortunately, some political actors have attempted to divert these PCEF resources towards their own interests. To be clear, we also support more investments in clean transportation projects. But the PCEF language, as approved by voters, was not designed to focus on transportation, at least not at the start. PCEF is focused on the areas our communities have been most underinvested: from renewable energy and energy efficiency to job training and green infrastructure. Transportation projects, which tend to be very costly, should be addressed by agencies like the Oregon or Portland transportation agencies, and potentially PCEF down the road.

We should work together to find alternative revenue streams for climate action that can be created to fund pressing issues such as transportation. Based on the 65% of voter support for PCEF, it’s clear that voters are enthusiastic for new climate action ideas that center the most impacted people. Why aren’t we seeking new revenue streams and creative solutions rather than asking one program to cover a decades-long shortfall in climate investments?

I have full confidence in the PCEF grant committee and program staff to continue to build out an innovative program that considers the input of all community members and not let us be silenced. Portlanders have a shared climate future, and it’s time to make sure that we invest in every community. The Portland Clean Energy Fund is on track to get us there, with a range of voices participating every step of the way, and communities at the center. I encourage all voters with interest in this process to participate, and make your voices heard by attending publicly available meetings via video conference call.

350PDX is recruiting new board members