Twenty seven coal power stations are planned for construction in the Philippines. As part of the global #BreakFree protests, around 10,000 Filipinos marched in Batangas City on May 4 demanding an end to coal and transition to renewable energy. The protest comes just five days before national elections.

People and civil society groups are demanding that the next Philippines administration cancel all proposed coal plants nationwide and hasten a transition to renewable energy, according to a Greenpeace statement.“We are facing a planetary emergency. Now more than ever, we need leaders who are pro-people and pro-environment, not pro-coal and pro-climate change,” said Lipa Archbishop Ramon Arguelles, who led the march to the Batangas Provincial Sports Complex.

The anti-coal march highlighted a national campaign called “Piglas Batangas! Piglas Pilipinas!” symbolized by the struggle against the proposed 600-megawatt coal plant of JG Summit Holdings in Barangay (Village) Pinamucan Ibaba, Batangas City. The opposition to the plan is led by the Lipa Archdiocesan Ministry on Environment, local fisherfolk, and other concerned citizens.

“Even without the coal plant, the existing plants of JG Summit are already poisoning our air, water, and land. The proposed coal plant would only make it harder for us to breathe, much less fish,” said 27-year-old Reymond Mendoza, a fisherman from the nearby barangay of Simlong, which also hosts the Gokongwei family-owned complex. The complex has a petrochemical and naphtha cracker plant.

The local anti-coal groups were joined by other coal-affected communities from Quezon and other parts of the country, as well as people’s movements and civil society groups from Metro Manila and other provinces in Southern Luzon.

“Piglas is a call for the incoming president and other new government officials to scrap the Pinamucan coal plant and the other 26 proposed coal plants currently in the pipeline. It is also a demand for the phase-out of the 19 existing coal plants nationwide,” explained Ian Rivera, national coordinator of the Philippine Movement for Climate Justice.

“The next administration must review the current one’s commitment to reduce 70% of our country’s emissions by 2030. It must also demand climate finance from developed countries, as well as mobilize its own resources, so it can implement a swift and just transition to clean and renewable energy,” added Ruel Cabile, national coordinator of Aksyon Klima Pilipinas.

The campaign is part of a worldwide movement and the first in Asia to join “Break Free from Fossil Fuels 2016”, a global wave of peaceful direct actions across 12 days and six continents. Mass actions are scheduled until May 15 in other countries including Indonesia, Nigeria, Brazil, the United States, Germany, and Australia.

A Catholic Archbishop Ramon Arguelles of Lipa attended the demonstration and called for other Catholic Church leaders to drop their silence and oppose new coal fired power plants.

“I call on all bishops in Asia … We must support the promotion of clean and renewable energy. I challenge the bishops to publicly speak out and condemn coal. We have to do what God told us to do, to protect the environment,” said Archbishop Arguelles.

“As shepherds, we must lead the fight to break free from dirty energy,” he added, saying that church leaders “need to show full commitment” to Pope Francis’ encyclical on the environment and climate change, according to ucanews, an Asian Catholic news service..

Pope Francis issued a major encyclical on the environment and climate change called Laudato Si during 2015.

“Piglas Batangas, Piglas Pilipinas is our battlecry for a safe, peaceful, and sustainable society. Batangas and the rest of the Philippines will not bow to those who think of nothing but profit instead of people and plunder instead of protecting the environment. Coal represents darkness, and Break Free is our source of light, especially for all communities who are standing up in the face of the fossil fuel industry’s relentless expansion despite climate change and the people’s clamor for climate justice. Today we declare that we will break free from coal,” said Naderev ‘Yeb’ Saño, executive director of Greenpeace Southeast Asia.

“Under the banner of Break Free, the global climate movement is proclaiming the end of fossil fuels, challenging governments to concretely respond to the climate crisis and the urgent need to keep global warming below 1.5⁰C,” said Lidy Nacpil, coordinator of the Asian Peoples Movement on Debt and Development and global steering committee member of Break Free. 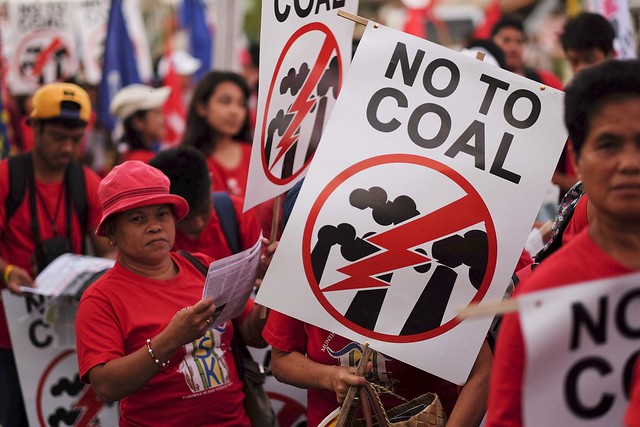 Break Free Pacific Northwest Action
This May: Break Free From Fossil Fuels
“…empower people to take more action and connect further the movements…”
How the Epic Global Resistance to Fossil Fuels is Growing in 2016
Come to Anacortes in Mid May…Because Business As Usual Is Killing Us
The Roots and Shoots of Just Transition
Mass blockade of UK's largest opencast coal mine ends without arrests