After 12 hours, the mass occupation and blockade by Reclaim the Power of the UK’s largest opencast coal mine – Ffos-y-fran – has ended with no arrests.

Over 300 participated, making it the biggest ever mass action in a UK coal mine. The blockade also launches a fortnight of similar actions globally, all targeting major fossil fuel infrastructure in 13 countries worldwide.

The mass civil trespass by climate action network Reclaim the Power began at 5.30am this morning and halted work across the site. Activists donned red boilersuits and used creative props such as inflatable cubes, dragon puppets and metres-long red banners.

Hannah Smith, who was part of the action said:

“Today we shut down the UK’s largest coal mine because we must keep fossil fuels in the ground to stop catastrophic climate change.

“Continuing to dig up coal is a red line for the climate that we won’t allow governments and corporations to cross.

“We are taking action in solidarity with the local community who have been battling Ffos-y-fran for nearly a decade, and now face the threat of a new mine next door.

“Wales deserves a transition away from dirty coal, and the creation of sustainable employment in an economy that respects our planet and its inhabitants, now and in the future.

“With Wales going to the polls this Thursday and the climate crisis more urgent than ever, our action sends a bold signal that we must end coal now.”

Reclaim the Power have spent the last four days at an ‘End Coal Now’ camp on common land near Ffos-y-fran. Since Saturday, they have organised events with residents, unions, councillors and Assembly candidates to highlight the potential for thousands of sustainable jobs in clean energy industries, rather than the opencast mining that has devastated the local area.

Today’s action supported a long-standing local campaign by the United Valleys Action Group, who are now resisting a proposed mine at Nant Llesg. 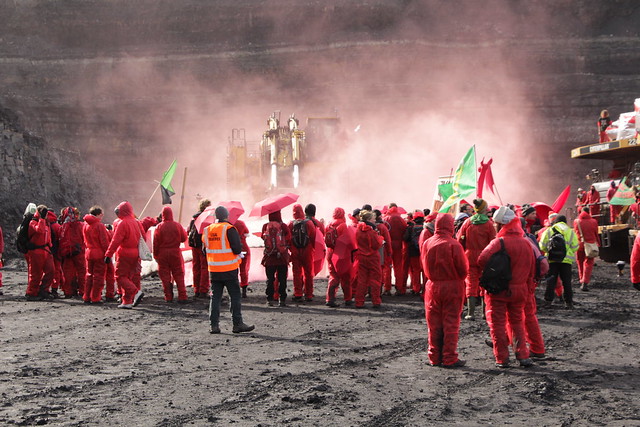 How the Epic Global Resistance to Fossil Fuels is Growing in 2016
Come to Anacortes in Mid May…Because Business As Usual Is Killing Us
Break Free Pacific Northwest Action
“…empower people to take more action and connect further the movements…”
This May: Break Free From Fossil Fuels
Philippines: 10,000 march to #BreakFree from #coal in Batangas city
The Roots and Shoots of Just Transition