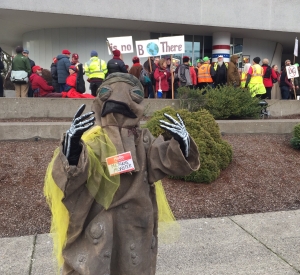 I volunteered to become the most vile and justifiably loathed creature in modern times – the methane monster.  The monster that adds to global warming by trapping heat 86 times more potently than carbon. Some call it a ‘bridge fuel’ but only because they stand to benefit financially.  It’s everywhere. It’s what we call ‘natural gas’ and ‘fracked gas’. It comes from cow burps, and rotting vegetation. It even seeps up and sometimes explodes out of the melting permafrost.  We need to stop it. So I volunteered to take the ridicule and become methane personified in a creatively fashioned large purposely ugly costume.

As the personification of methane I was able to get in touch with its power and potency.  I growled and took in a stance like a Maori warrior whose native lands are being overtaken by sea level rise.  I jumped in the air, skeleton hands raised high and shouted ‘BOOM’. I grasped at the innocent by standers and shouted, ‘I want to testify.  I am death’. I went to entertain the supporters of the Pacific Connector Pipeline and Jordan Cove liquid fracked gas plant. I wanted dialog but one can’t reason with methane so I shouted ‘BOOM’ in hope they would see how deadly dangerous I can be to them.

‘Who are you?’ one man asked.  I am methane I growled. ‘Oh, like cow farts’ he replied.  I buzzed my lips hard and loud. ‘You stink’ he said. They wanted photos with me, these supporters of increasing methane pollution.  They said they wanted me with them when they ran out of gas. They were making light of me so I shouted, ‘BOOM’ and jumped in the air with my skeleton hands held high.  ‘I want to testify, I am death’. They laughed. I was a joke.

They became bored and turned away.  I leaned over to a young woman who had said she wants the plant because she needs a job.  I said, ‘they exploited me. They just want to make money off me’.

I saw the protesters speaking and chanting and singing.  A larger than life Governor Brown was there. She has the power to stop the pipeline and the plant. ‘She can stop this project in its tracks’, I thought so I cowered.  Methane should be afraid of her but when will she act? White people talked about a private foreign company taking their land without their permission. That’s not what we thought ‘eminent domain’ means. The native peoples talked about how sacred the land is and the story of  the ‘black snake’ that will destroy the land unless the people stop it. People sang and pledged to support clean energy. I crouched low and put my hands over my eyes. The thought came, ‘I want to stay in the ground. Bury me deep and bury me long. That’s where I belong’.