Over the last week the police brutality situation in Portland has made frontpage news across the world, with federal officers with the Department of Homeland Security (DHS) descending on our city, firing an alarming amount of CS tear gas, mace, smoke, and munitions at the crowd, grabbing Portland protesters off the street and throwing them into unmarked vans; shooting at a group of moms; and beating a veteran and breaking his hand for standing in the street.

The secretary of the Department of Homeland Security declared that Portland is “under siege.” He’s not wrong. What he gets incorrect, however, is that this city is besieged by a series of law enforcement agencies, including his own federal police officers, not “violent anarchists.” Over the weekend, officers with the Portland Police Bureau and federal agencies sent countless Portlanders to the hospital with swollen eyes, shattered bones, burning flesh, broken ribs, and a lifetime of trauma for showing up to defend Black lives from police violence. [Portland Mercury]

Here are our five big takeaways from this week.

1. Defend the right to protest

350PDX knows that protest is the most effective way, and possibly the only way, to bring about transformative societal change. That’s what is needed to tackle the climate crisis, and that’s what is needed to fight for racial justice. Defending the right to protest is central to our mission. The Portland local police and now the federal troops are attempting to suppress that right. The only way to fight back is to stand up and show that we cannot be suppressed!

If you’ve been staying away from the protests so far, now is the time to get involved. Protests until now have been mostly younger folks, but two new parent groups, Wall of Moms and PDXDadPod, have started showing up and forming a barrier between demonstrators and the feds. Turnout in recent nights has been the highest since early June with up to 2,000 people, so it’s a good time to join, with bigger crowds generally making it safer for everyone. See below for ways to show up or get involved.

2. Defund the police
The fact that the police have responded to protests about racial justice and police brutality by spiraling more out of control, ignoring orders from the Mayor, City Council, and the Governor, and perpetuating violence has shown that the police simply cannot be reformed in its current state. The recent development of the feds getting involved has brought more media attention, but the story of what is happening in Portland is the same – police (now teaming up with feds) rioting in the city, instigating violence, and trampling our rights. If the argument for defunding or abolishing the police was strong before these protests, it is crystal clear now.

3. This is nothing new to Black communities
Many of us are feeling a deep fear of police for the first time. It’s important to understand that this is just a taste of what Black communities have been experiencing every day for centuries. If this feeling is new for you, showing up and participating right now is a good way to start making up for lost time.

4. This is not a distraction from the climate fight
Climate change does not exist in a vacuum. It is a symptom of an underlying economic system that uses tools like racism and police brutality to hold it in place. You cannot have endless growth and fossil fuel sacrifice zones without racial injustice, and you cannot defend an unjust capitalist system without an unaccountable police force. These fights are linked and depend on each other. We need massive social change, and right now our best chance to get it is getting behind the movement for Black lives.

5. Resiliency and creativity in the face of it all
What we’ve seen over the past 54 days, and especially the last week, is the incredible staying power and resilience of Portland’s protesters. The last few nights have had the biggest turnouts since early June. We’ve also seen creativity and adaptability, from the Wall of Moms forming a wall between feds and demonstrators, to the dads of PDXDadPod showing up with leafblowers to blow tear gas back as the police, to Riot Ribs showing up and feeding protesters and houseless folks and getting constantly raided by the police, only to show up again every day and every night. From the folks who’ve skilled themselves up to be medics and tear gas extinguishers, to the mutual aid structures and networks that have sprung up to support BIPOC folks through this traumatic time, we are not waiting any longer for the community we want to see; instead, we’re building it.

Portland has shown the world it will not be ruled by force. But it did more than that. The Trump administration has openly said that Portland is a preview of a system they intend to unleash on cities across the country, and we proved that they can be resisted. We made them look vulnerable. When they roll into Los Angeles or Chicago or Miami, everyone is already going to know they can be beaten. “Portland did it. So can we.” 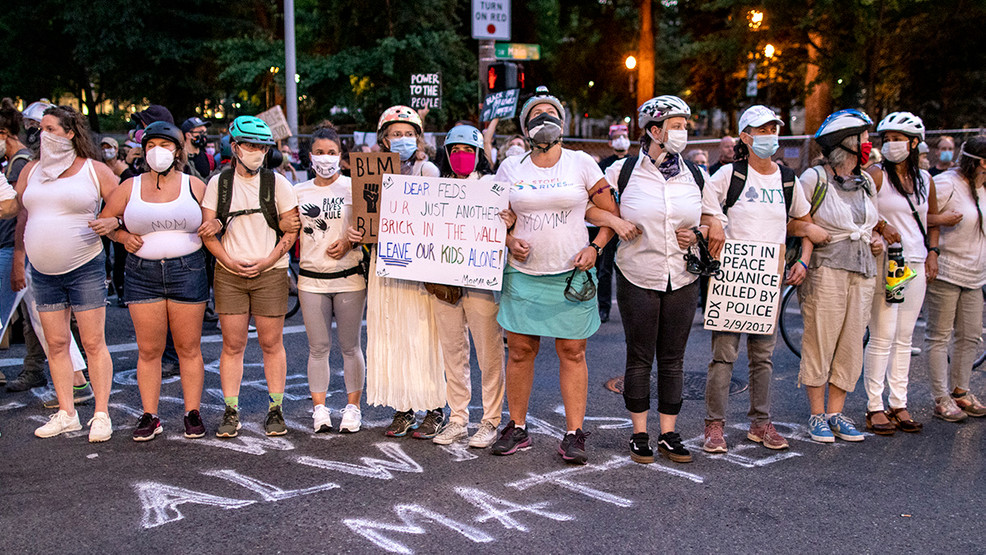 Wall of Moms [higher risk from police]
Nightly, 8:45PM each night (but check their Twitter first)
Meet at Salmon Springs, at SW Salmon and Naito Parkway

All of these events could escalate into police brutality, we just highlighted the ones that will almost certainly escalate and you should come prepared (see below). Attend at your own risk!

(Lilith Sinclair has a much more thorough protest preparation guide that we highly recommend.)\

3. Other ways to take action

– Join Critical Resistance in writing a letter to each one of the 14,500 people currently held in Oregon’s state prisons.

– Black & Pink PDX is seeking pen pals for incarcerated LGBTQ+ folks – sign up to be a pen pal here! 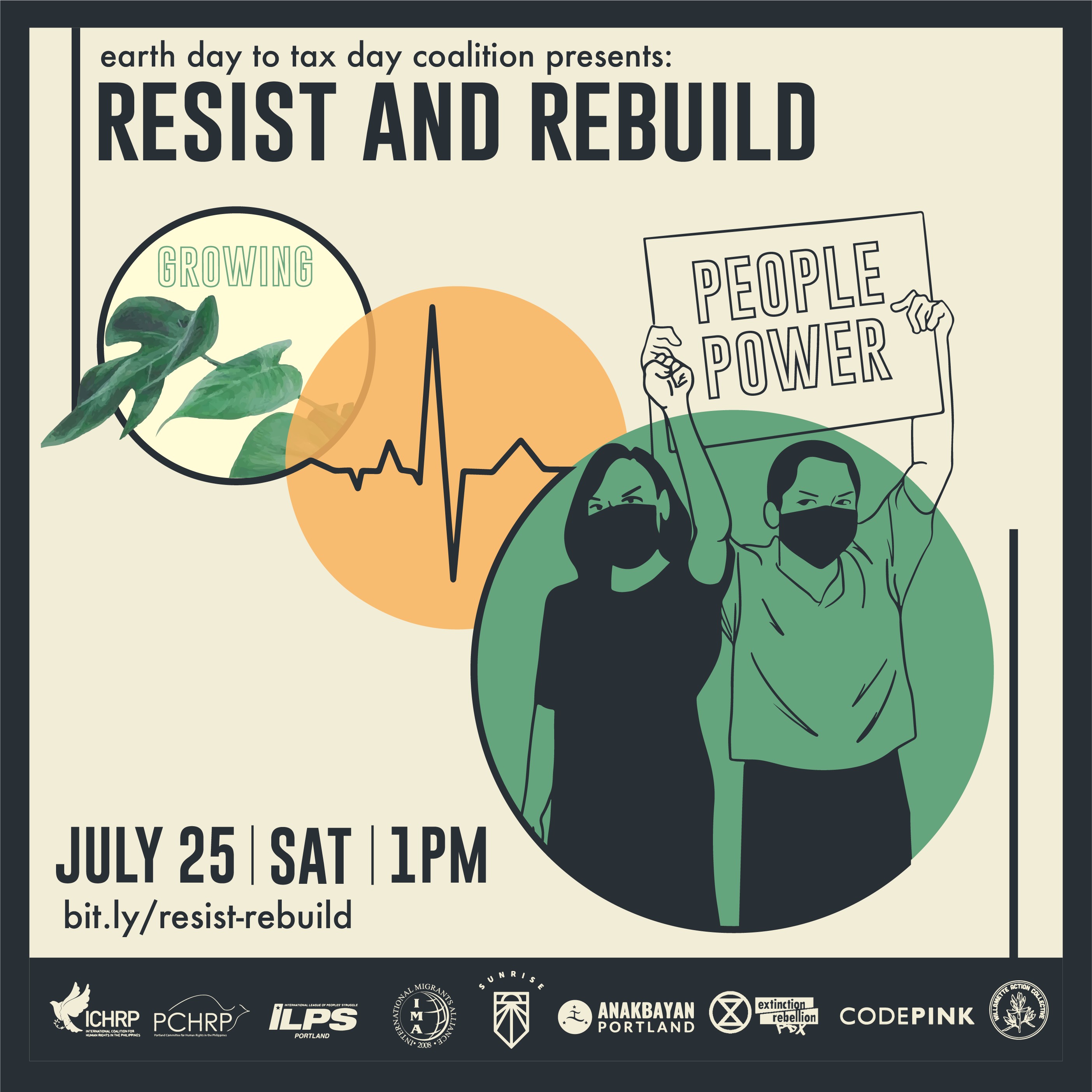 Thank you all for the work that you do, stay safe, and we’re all in this together,
Ashley, Chris, Chuck, Dineen, Indi, Lucy – the 350PDX staff

P.S. Indi is our new Coalition Manager! We’ll be sending out an intro about her soon!

P.P.S. If you found this email useful then please consider donating to our summer appeal. We’re pivoting hard and adapting daily to get behind this movement for transformational societal change, but with this economic crisis we need help from our community to be able to keep going and remain in this fight for the long haul. Thank you!