Just two weeks after Hurricane Eta caused destruction and death across Central America, Iota touched down just 15 miles from the same spot as one of the strongest hurricanes this late in the year in record history.

Nicaragua’s carbon emissions are just 0.02% of the world total. That they are bearing the brunt of the climate crisis right now is cruel climate injustice. You can donate here. 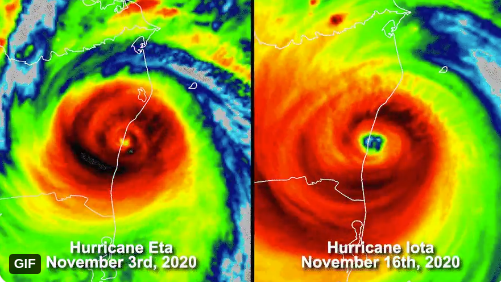 How is the election going?

The democratic process is churning along towards confirming President-elect Biden. Trump continues norm-busting, but has not acted outside of his authority as President which would be required to pull off a coup.

After sustaining numerous losses (23, if you’re keeping count), Trump’s legal options have narrowed considerably. He is churning a narrative that undermines the belief in the election, but does not seem capable of changing the outcome. Staff are fleeing his campaign. By encouraging Biden to receive security briefings, Republicans found a strategy to encourage a transfer of power that avoids direct confrontation with the administration. And more Republican and world leaders are coming out in support of President-elect Biden.

For about four hours yesterday evening, one small part of the US election system bent to Trump’s narrative for the first time. In Wayne County, the county of Detroit, Michigan, the four-person Board of Canvassers met to certify the election results. In an unprecedented move the two Republicans on the board refused to vote to certify the results, meaning that millions of votes (mostly from Black voters) would have temporarily not been certified.

The good news is that there were signs that this was going to happen, and hundreds of people were ready to mobilize, and did so during the public comment period which lasted for hours, as well as putting in thousands of phonecalls to state representatives and county commissioners, and holding a car caravan. This pressure along with intense scrutiny from the media and politicians meant that four hours later the Republicans reversed course and the board unanimously certified the results.

It’s unclear whether this case was a fluke, or a first crack in the wall of our election process. We’ll keep monitoring and keeping you informed, but two things are clear:

The damage being done to trust in our elections and social cohesion is dangerous and will have long lasting implications, but at this time, Trump has no momentum and no viable path to override the will of the voters and retain power after January 20th.

We continue to encourage folks to breathe, give gratitude to election workers, and prepare for pressuring a Biden presidency.